My Working Life at the International Fire Training Centre 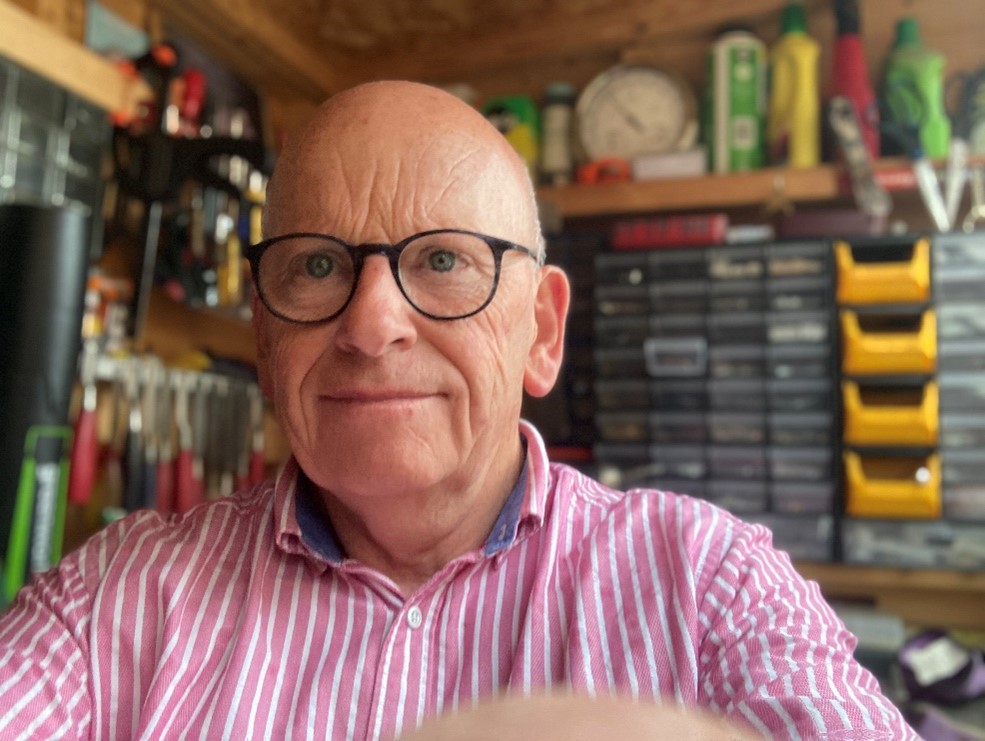 Hello, I am Chris Brown.

Started at IFTC in 1981, working for building contractor D.T. Bullock as a joiner carrying out refurbishing work and new build works for civil aviation authority.

On completion of works I was asked by the Superintendent, Mr Bill Martin, if I would be interested in working for IFTC as a storeman / handy man.

The building trade was going through a recession in the early 1980s, so I did not hesitate to accept the offer starting in a full-time secure position as a civil servant

At this time the IFTC was such a colourful place with delegates from all around the globe and the IFTC had the monopoly on all aviation training in the UK.

I was responsible for issuing fire kit to the student as well as cleaning it on completion. The firefighters were issued wellingtons, single leg black leggings, heavy black tunic and a fire helmet. It was nice to see the fire kit change over the coming years.

I never saw much of the fireground at first but always wanted to get over and see what was happening.

The site was very disciplined – in those days students paraded every day and marched from building to building.

Students cleaned the appliances and washed the hoses after training had been completed.

After 10 years in this role an opportunity arose to work on the fireground as a fire-lighter and doing equipment maintenance and when I applied for the job I was successful. 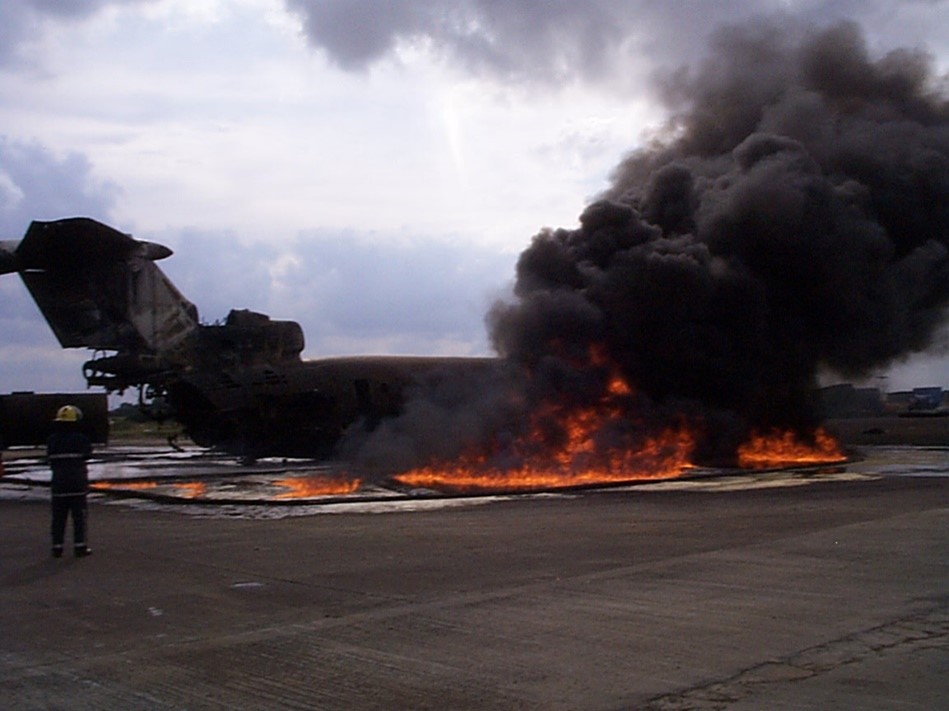 What an adventure playground this was. There were three of us – Barry Stephenson, Dicky Baird and me.

It was something different every day which made it so interesting.

I remember lots of change and diversification with the introduction of offshore and industrial firefighting been made available. There were some who were against moving from just aviation to other fields but we are in the North East of England – the home of industrial heritage and where the majority of offshore workers came from.

It really took off and the CAA invested by building the Multi-Purpose Training Rig, an offshore oil rig with a 747 nose cone and a water recycling plant.

As support staff it was decided that we should become BA wearers for safety and operating scenarios inside the multi rig and then also carry out a full basic firefighting course to give us a better understanding of what IFTC was about.

Working on the fireground was hard work and being in the middle of open countryside you breathed in fresh air.

In the early days. the fires were harder to control and there were one or two times when called the airport fire section to come and help us extinguish.

The main fires were based around a Trident Aircraft placed in a bunded area. The undercarriage was blown off by a special forces teams in a planned exercise – the explosion was massive.

We used a metal pole with a fire blanket end dipped in gas oil to ignite the fires and then followed a petrol trail over the gasoil.

You had to be quick and knowledgeable of the wind direction. 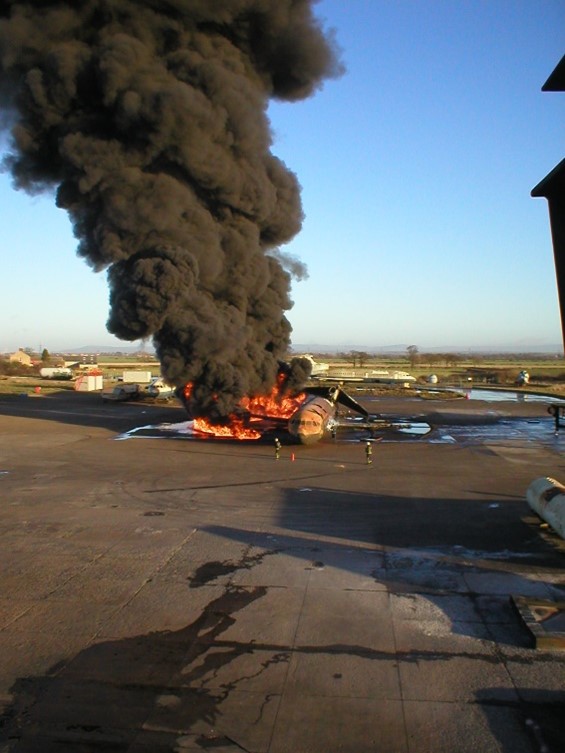 In 1996 the school was privatised and since then we have belonged to Serco.

Everyone was on first name terms as that’s how they wanted it to be.

Serco invested on a large scale which could be seen across the site and one of best memories that I can recall was getting a Christmas Bonus which was a great help to everyone.

I moved on within the company taking on a supervisory role and followed a management course three nights a week over two years at Middlesbrough College.

I was enjoying my role and got the chance to take on more staff which was done by creating a Training for Work Programme. All those chosen had to have been unemployed for at least six months. Their training involved two weeks on the fireground and two weeks in the BA room with Lenny Dunn a retired Divisional Officer from Darlington Fire Brigade. They were paid their unemployment benefit and an extra £10 and a meal in the canteen. On completion they were offered a full time role within the company.

At one point there were 26 staff in the support role.

Serco continued to develop the site and we were able to purchase & build a new aviation training rig. This was to be a design and build exercise managed by ourselves. Neil Gray was the Project Manager.

We travelled across the country and visited Holland to view different rigs and get opinions from firefighters on what they would like to see on the IFTC training ground.

We opted for a Cat 8 &10 simulator in a crashed configuration using dual fuel. Kidde Fire Trainers were awarded the contract to build, install and maintain.

I was responsible for the daily operations and had many a long night with issues going around my head. We had to overcome many difficult situations at times and movements of sections could only take place after 10 to midnight when that last flight was out of Teesside Airspace. We had to travel all the way around the airfield to get to the Fire Ground and have in place recovery vehicles should any breakdown occur. 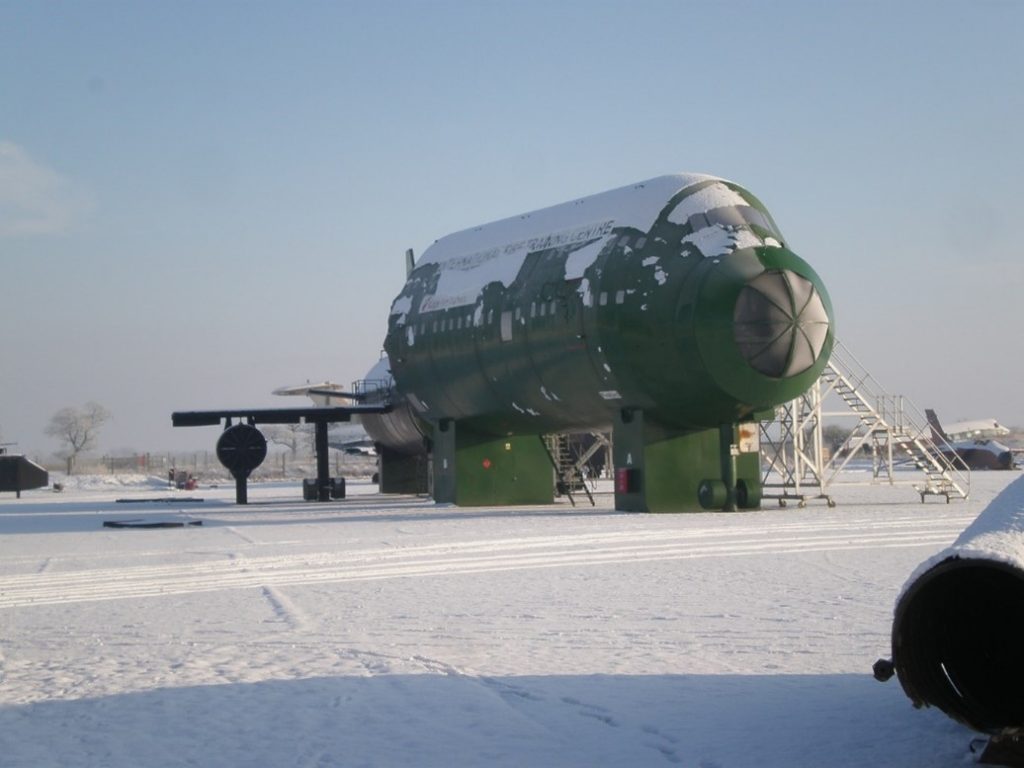 The winters were harsh to say the least and I remember one winter where it got down to as low as minus 19.5 degrees. The hoses froze yet we managed to continue to deliver the training. Pipework burst frequently and the water lagoon froze so we had to use appliances for all water and foam supply.

My role was exhausting at times and I spent much of my weekends in at work maintaining the water plant and there were many callouts to breakdowns and alarms sounding which awoke the local farmer who would then call me to complain!

The memory of the worst call-out was in the early hours of 18.09.09. The airport security called me at 1.30am saying a generator was here for the Fire Ground due to power failure. After numerous calls I was on site in total darkness, the water plant was flooded as all pumps had stopped and the utility provider had to reinstate the supply by installing a temporary generator. 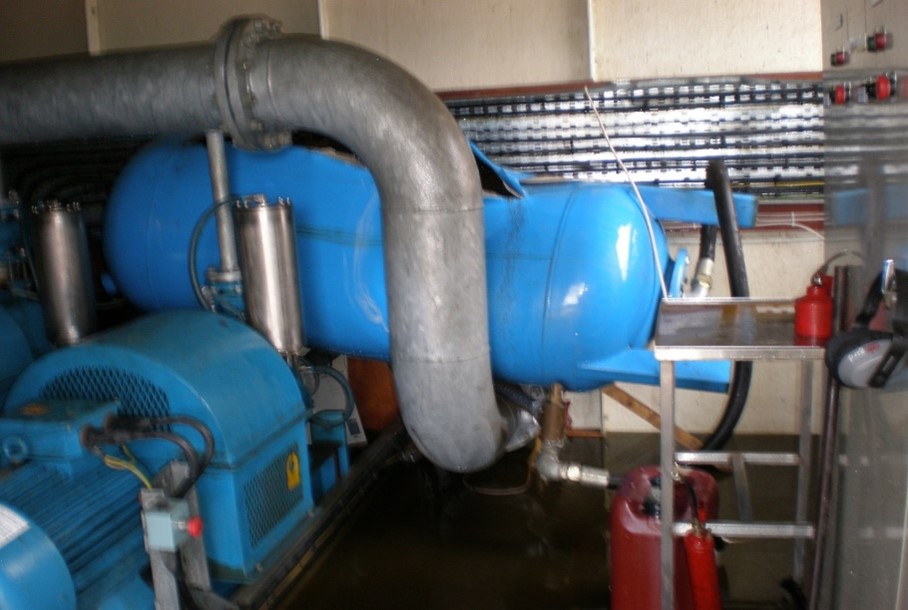 When it started, the generator supplied for too much power and it caused the priming tank to split and explode. I was stood against the grey delivery pipe which gave me the protection I needed. The memory of the incident is still with me and loud bangs still affect me more than they should.

My last 10 years were incredible ones at IFTC as I created an inhouse development team and we created and built various additional training scenarios which all sectors of the business benefitted from.

Two contractors were really useful in the build of projects BOD of O’Donnell Site Services and Tom Henderson of Henderson Engineering NE.

The team at IFTC mainly consisted of Steve Hadwin & Iain Foster Todd and we came up with many ideas and suggestions and put them to the staff for their input.

Lots of the materials I found in various scrap yards that BOD had seen on his travels throughout the NE and Henderson’s did the modifications to make them fit the site. 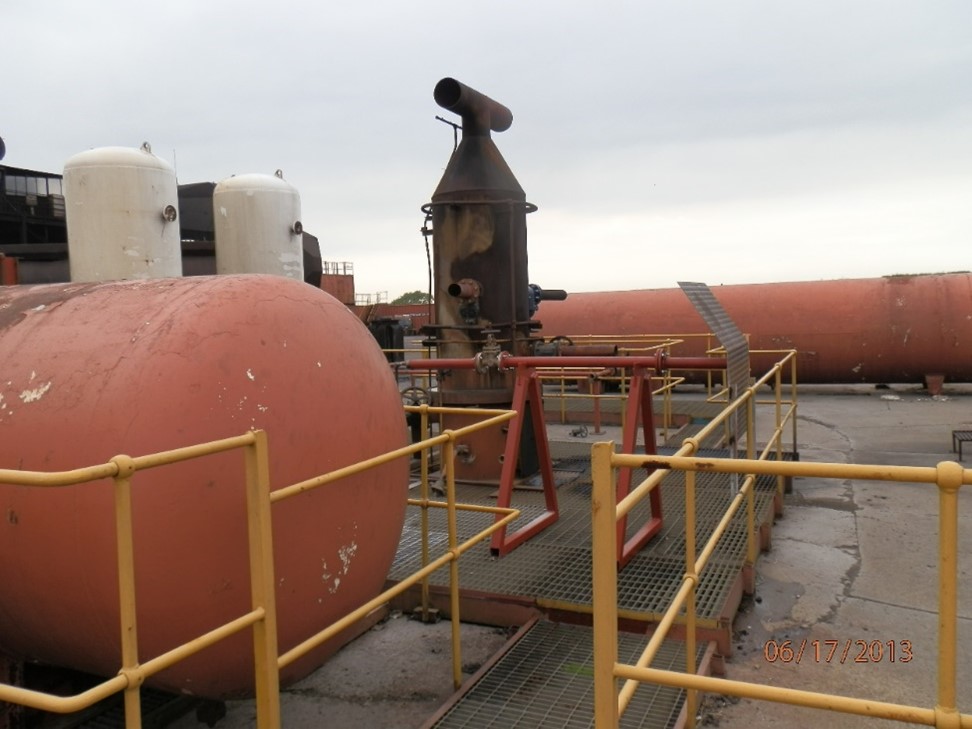 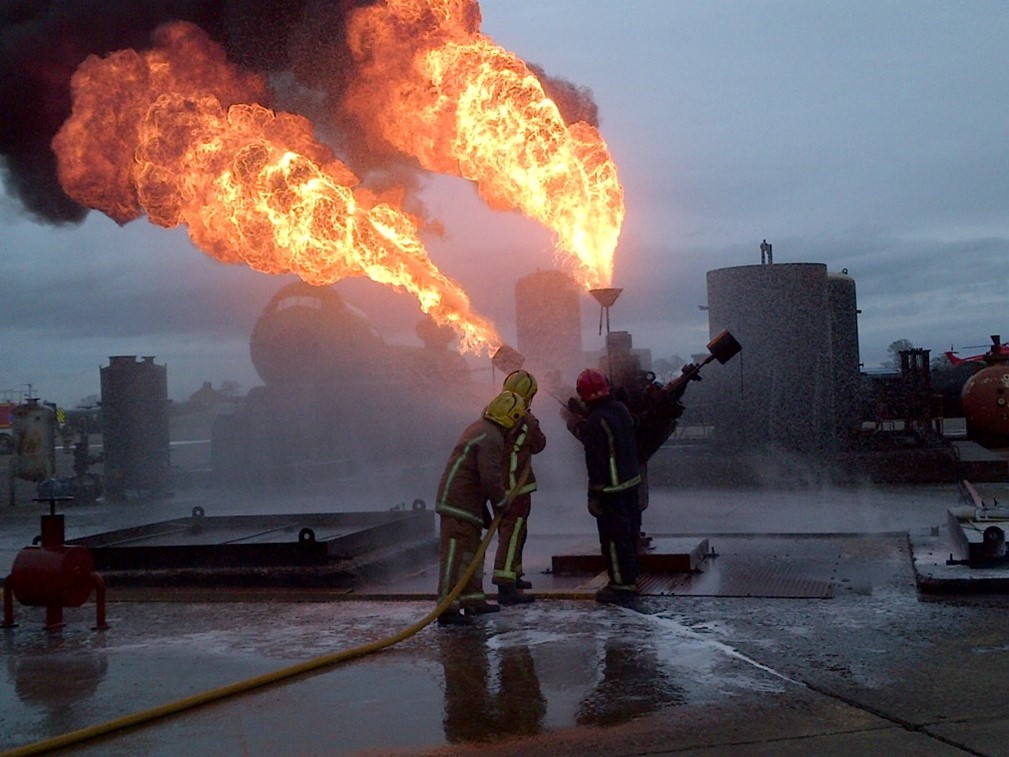 The blow out preventer came from a scrapyard in Morecambe. 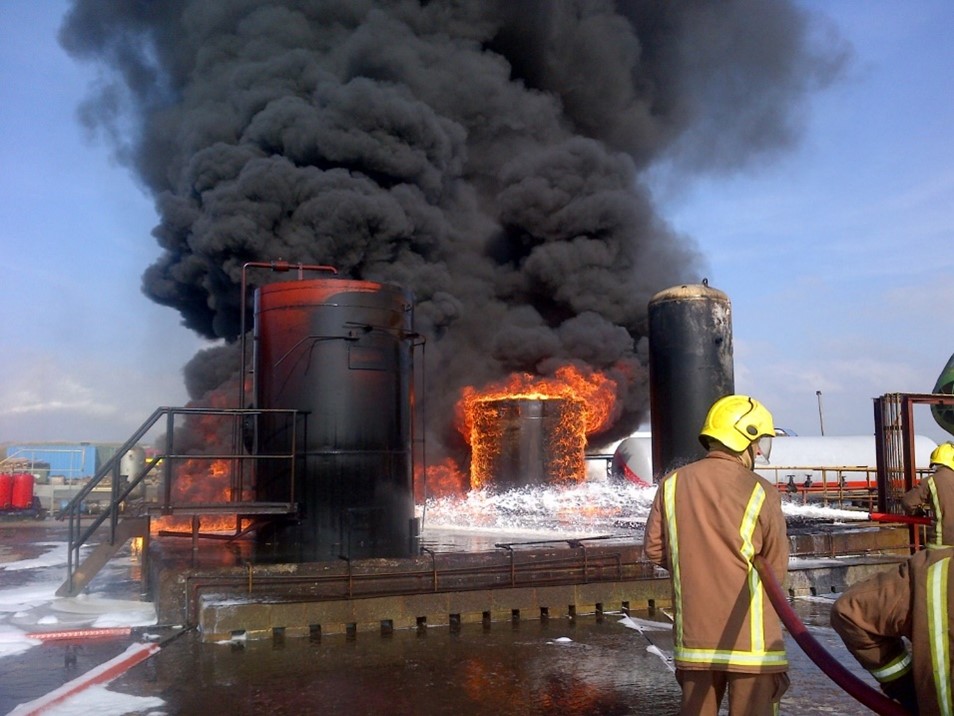 The Tank farm in the 800square foot bund. 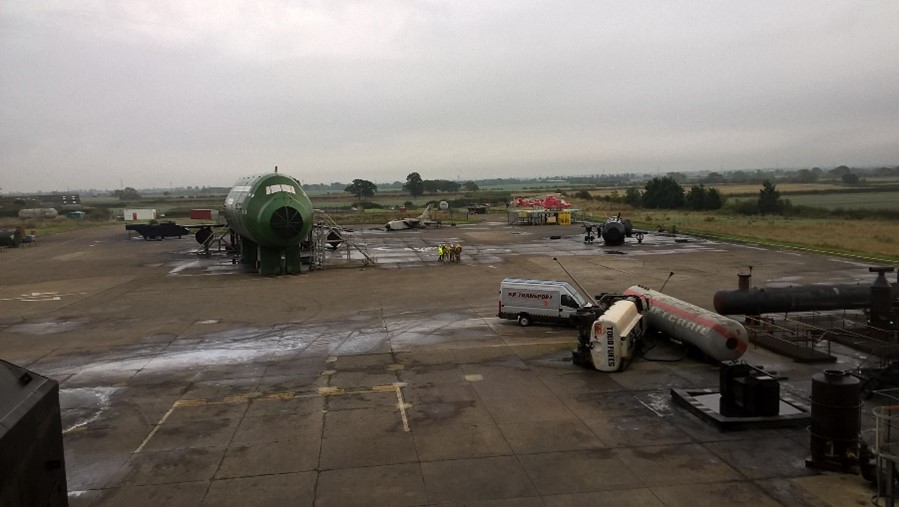 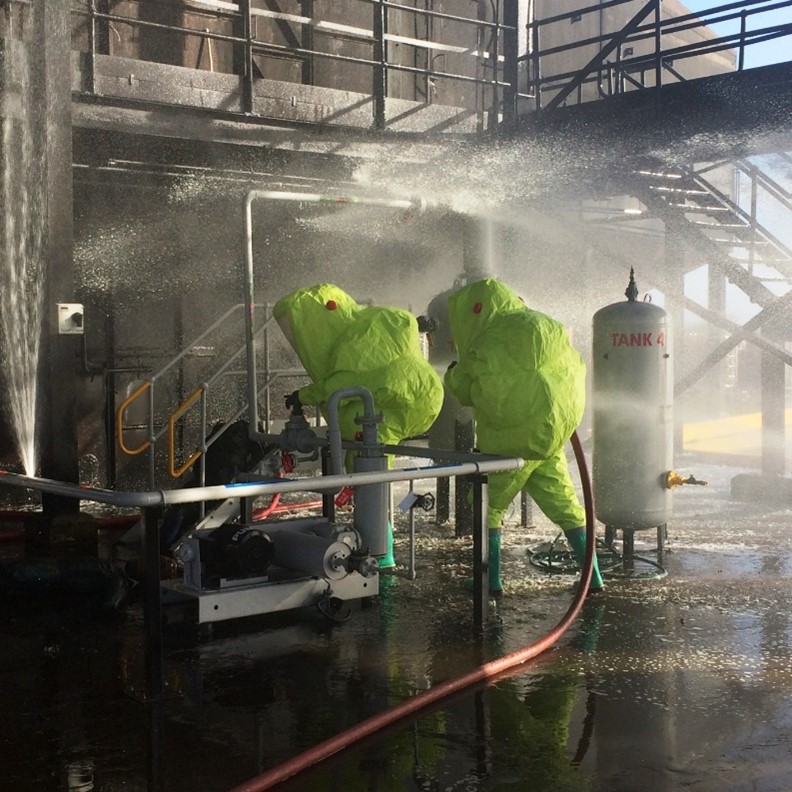 The chemical leak and pipe replacement

For all the hard work and dedication, we were rewarded on several occasions with a Serco Pulse Awards and staff travelled to Wentworth Golf club to collect. They were very memorable days.

Receiving Innovation award for Cat 5,8 &10 training simulators. We also picked up a Pulse award for teamwork in environmental savings and there was solo award I won under the Serco Pride category. 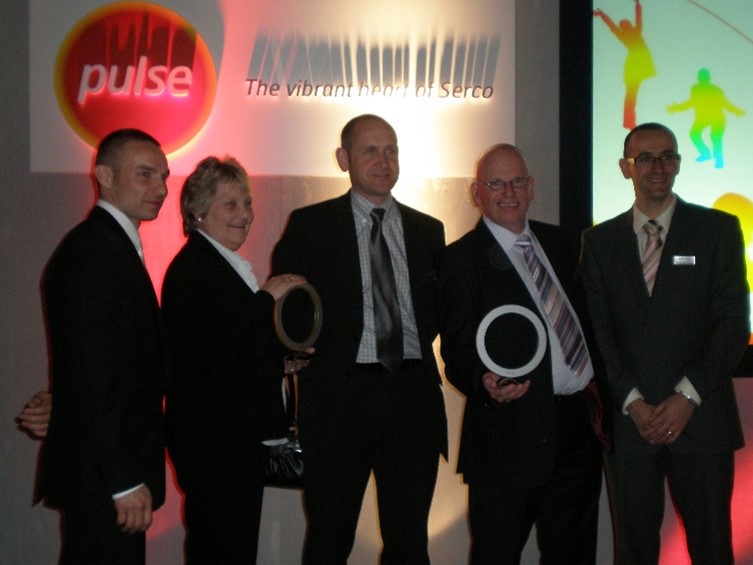 Over the years we had many visitors and TV personalities on the Fire Ground. The most famous being HRH The Duke of York (Prince Andrew) who had an eye for detail.

Whilst talking to Bob Attenborough the prince noticed that his buttons were different which was because he lost one and got a different one thinking no one would notice. 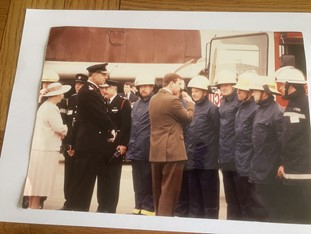 I could go on and on with memories of the last 40 years, it was just a remarkable place to work so many friendships made with colleagues, delegates, contractors and suppliers. There were ten general managers during my time at IFTC:

Now in retirement a day does not go by without thinking of the past and flicking through my hundreds of photos captured.

It’s just unfortunate that we are still in a pandemic with coronavirus which prevents me going back to visit but hopefully soon the situation will ease and be safe to return.

Wishing IFTC all the success for another 40 years!