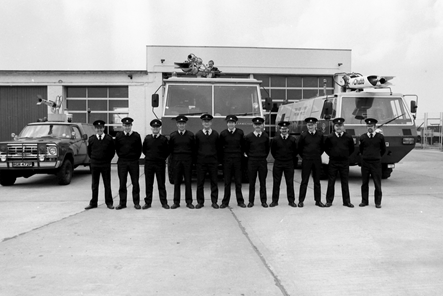 Chris Farnaby MBE has been involved in many aspects of aviation since 1974 and spent 27 years with the UK Civil Aviation Authority (CAA).

During this time Chris witnessed the early development of Safety Management Systems across airports and was instrumental in the ongoing development and evaluation of SMS across the aviation sector.

Chris has very kindly shared his memories with us on working for the IFTC, to celebrate our 40th anniversary year on Teesside! 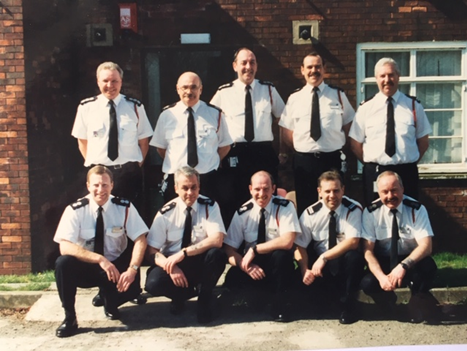 It is really good to see that the International Fire Training Centre is celebrating forty years of service at Teesside Airport and I wish all the team my very best wishes. I first joined the Airport Fire Service (AFS) at Teesside Airport in November 1974. This was a great opportunity and without any hesitation it was one of my best decisions. I stayed at the airport until 1986 and thoroughly enjoyed the whole experience and mainly the people. In 1986 I got the opportunity to join the Civil Aviation Authority (CAA) at their Fire Service Training School (FSTS) which had been relocated to Teesside from Stansted Airport in 1981. This was another great opportunity and on Monday 5th May 1986 I moved to my position at FSTS as a Staff Instructor and later that year I was joined by Station Officer Alex Tough from the BAA.

Historically the CAA FSTS first operated under the Ministry of Transport and Civil Aviation which was the forerunner to the UK CAA we know today. So from the early 1940s FSTS had evolved from Cardiff Pengan Moors Aerodrome, Stansted and now Teesside. Clearly things have changed dramatically over 80 years and training is no exception. The Airport Fire Service in general is a young service when compared to the Local Authority Fire Brigades and Fire and Rescue Services we know today.  The training at Cardiff Pengan Moors is very recognisable to my early training at FSTS Stansted except the equipment, fire appliances simulators and personal protective equipment (PPE) had evolved significantly by 1975. It is my understanding that many of the staff that operated at Pengan Moors under Superintendent H Radford Lucas moved to Stansted. The FSTS transferred to Stansted when FSTS was moved circa 1960. 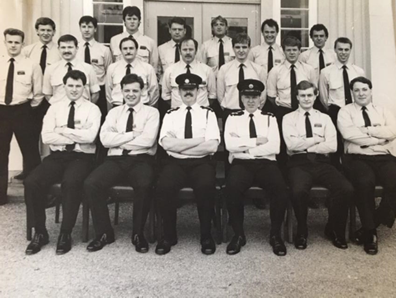 I stayed at the training school at Teesside for ten years and witnessed the transition to IFTC. FSTS changed its name to IFTC in 1992 and this was officially covered in Airport Fire Service Memorandum 2/92, stating that as part of the ongoing policy of separation of Safety Regulation from the provision of services the CAA FSTS had been devolved from the CAA Safety Regulation Group and established as a Strategic Business Unit (SBU). It would be known as the International Fire Training Centre.

The CAA Flight Calibration Service (FCS) moved from Stansted to Teesside around March 1993 to share common facilities and management under Colin Chitty who already managed the IFTC at that time as a CAA SBU. The photographic laboratory services were also contracted out to a local company, HighLight Photographics. IFTC was then sold to Serco and in October 1996 FCS was sold to Flight Precision Ltd 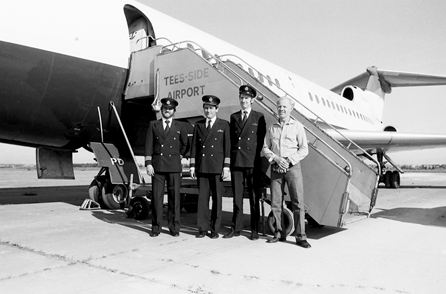 They were fantastic years and it was a brilliant period in the making and history of aviation fire service training. We witnessed the introduction of the first modern purpose built training simulators, command simulator, Liquefied Petroleum Gas (LPG) rigs and modern classroom training facilities. In the mid-1990s we also embarked on training the Instructors in new competences in Training and Development. This was a significant undertaking at the time and many thought it was unnecessary. However, it was vital to our future and we needed to lead the industry forward. The process was undertaken with the City and Guilds of London Institute and the local Centre would be Darlington College of Technology. We linked up with Michael Cox who was their Director of Vocational Programmes and we were also very fortunate be driven on by Tim Oakes who was very enthusiastic about the whole process. The Structured Learning Programmes were all reviewed and adapted accordingly and it all dovetailed in with Competence Based Training. 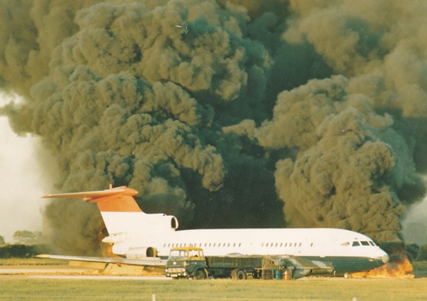 We ran many bespoke courses at FSTS and trained students from all corners of the UK and all over the World. One such arrangement was a long contract training staff from the Saudi Arabian Presidency of Civil Aviation (PCA) now known as The General Authority of Civil Aviation of the Kingdom of Saudi Arabia. This was primarily based on an accident at Riyadh on 19 August 1980. All 287 passengers and 14 crew on board the Lockheed L-1011-200 TriStar died from smoke inhalation. The aircraft (Flight SV163) landed at Riyadh for a scheduled intermediate stop after a flight from Karachi. At 18:08 the aircraft took off for the final leg of its journey to Jeddah. Shortly after take-off, while climbing, visual and aural warnings indicated smoke in the aft cargo compartment. At this stage a return to Riyadh was initiated. The accident investigation felt that the RFFS under the PCA required more structured and formal training and a contract was agreed with the UK CAA. These courses were primarily run by John Goupilott BEM and Bob Wallace. Sadly Bob passed away in 1998. 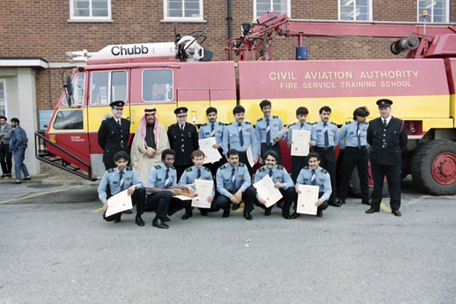 One other bespoke course which I remember with fond memories was the RFFS team from London City Airport in May 1987. The RFFS team had been selected carefully to ensure that local people were given every opportunity to work at the new docklands airport. The process was helped along by Mr Bill Martin the ex CAA Superintendent from FSTS. Once selected the team came to FSTS as a group and ADO Billy Walker and myself were allocated the course over a period of six weeks. When the students arrived we went through a similar introduction to any other course and described the general rules.  Once we started to explain the content of the course it became very obvious that most everyone had no experience at all.

However, what they all had was a sense of humour and nick name that stuck with them throughout their training.  At times it was hard to keep a straight face but it is one of my treasured experiences at FSTS.  I have continued to watch many of the original team go on to high ranking positions at several different airports throughout the UK.  One particular character was Grouty and he made me laugh continually throughout the course. If my memory serves me right we had one individual who was classed as experienced as he had been employed testing fire hydrants for the water board and that was it.  On one occasion I was explaining different types of water & foam branches, nozzles and monitors and somebody said branches grow on trees Sir.  It was time to leave the classroom and head outside to the technical building and show the students exactly what I was describing (a lesson learnt never assume).

All of the students worked extremely hard and passed their written and oral assessments for each element of the course. It terminated in final examinations which they all passed. They all departed very different people and came back to FSTS/IFTC many times over their careers and I met several of them many times as I continued my career with the CAA. We always had a strong bond and today I am very proud of them. The team of 18 passed out and left FSTS on 3 July 1987. In January 1992 Billy Walker and I teamed up again to run a similar bespoke course for 26 students on a basic training course from Prestwick.

In 1986 FSTS embarked on a contractual arrangement to train the firefighters and officers from Switzerland, Geneva Airport Safety and Security Service (SSA). The Federal Office of Civil Aviation (FOCA) who is responsible for aviation development and the supervision of civil aviation activities in Switzerland approved the process.  We started with Geneva and this involved a series of courses and I was allocated the task. On a wet and windy Sunday evening I drove back to Teesside Airport to meet their coordinator who was arriving for the first course a day early on the BMA London scheduled service.  I could not miss my new friend as he cleared customs and immigration; he was a tall man and immaculately dressed in his uniform.  It was Captain Francois Villard who was then second in command of the Geneva Airport SSA. 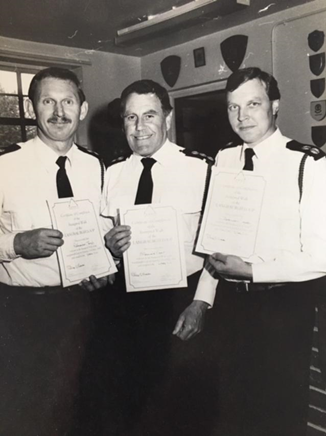 Charity Work
During my time at FSTS/IFTC I embarked on several charity walks with the team and most notably was the Langbaurgh Loop which was a completely new walk. In 1987 and in preparation for the first walk we embarked on raising funds for the nominated charities and the students passing through FSTS gave generously. On the 23rd May 1987 Bernie Mead, Alex Tough and myself completed the Inaugural Walk of the Langbaurgh Loop which is 40 miles. We completed the walk several more times and I am sure Alex was one of the fastest.

Working at the training school was a true privilege and an honour for me. I worked within a fantastic team and met many people and students from all over the World. I hope IFTC continue to prosper and support the airports across the UK and the World. My very best wishes to all the staff at IFTC.